The staff at the Kings SPCA Halfway Home in Lemoore¸ CA received a call from an animal control officer one chilly fall afternoon.

“We’ve got a little dog in really bad shape¸” said the officer. “We’ll be right over¸” replied Danielle Keener¸ from King’s SPCA .

Danielle had no idea what to expect. A little Brussels Griffon type of terrier mix had been discovered abandoned in the home of a recently incarcerated man. The man’s family had no idea this dog lived at the home nor how long she had been there all alone.

What Danielle saw was heartbreaking. The little female that she named “Shug” for Sugar was thin. Her skin had been crawling with fleas for so long that she had developed flea dermatitis from her midsection backwards. The hair was gone and the skin had turned black¸ inflamed¸ thickened and cracked into what is called “elephant skin”. There was hair loss down her back half, all over her chest, there were scabs behind her ears and her hair was dry¸ brittle and thin over her whole body. Shug’s ears were swollen almost completely shut with a bacterial and/or fungal infection. They were leaking with a yellow discharge and an awful smell. 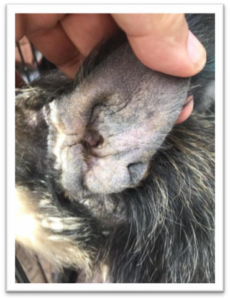 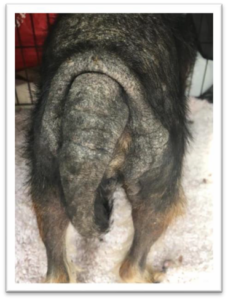 Danielle took her straight to the vet who gave Shug a steroid shot for her skin issues but did nothing to treat her ears. He said it could be months¸ maybe years before her body recovered and she may never be completely healthy again.

Danielle did not accept this prognosis. She reached out to her friend Tana at Tana’s Pet Grooming in Lemoore and asked if she could help. Tana was familiar with some great products from Iv San Bernard but was not fully trained in using them. She knew Cat Walters and her husband Steve from Canine Designs Mobile Grooming were Certified Pet Aestheticians– fully trained in how to use the products to heal skin and so Tana reached out to them.

A team was building around this sweet little dog and everyone was willing to help Shug for free. Cat¸ Steve and Cat’s sister Jennifer Whiteside (another CPAe from The Soapy Paw in Lemoore) had all been trained by veterinarian Dr. Cliff Faver—the owner of Iv San Bernard USA. Certified Pet Aestheticians are very skilled in the art of “restorative skin and coat care.” They have the knowledge and skills to use the correct products and processes to heal some of the most hopeless looking cases.

The team was also just as heartbroken seeing Shug for the first time. But they knew what to do.

The expression on Shug’s face after a few minutes wrapped in the towel –as the Zeolithe product was beginning to work– was blissful. 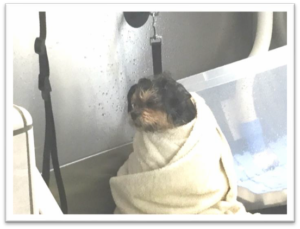 She relaxed so much that her eyelids started to droop and she wobbled a little on her feet—almost falling asleep as the pain and inflammation were calmed by the products starting to work in the heat of her wrap.

When Shug’s first therapy session was complete¸ the difference in her skin was remarkable. The inflammation was reduced by as much as fifty percent and her skin was softened and soothed.

Cat and the team continued Shug’s therapy twice a week for several weeks while Danielle fostered her and applied the at-home hydration sprays and oils recommended by the aestheticians. The progress was amazing. By the fifth week Shug was completely healed and her hair had completely grown back –soft¸ shiny and healthy. 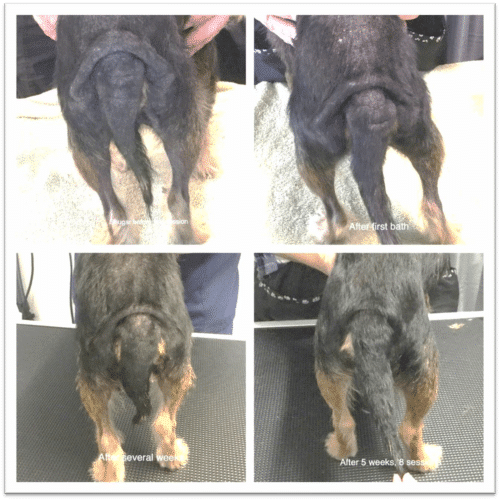 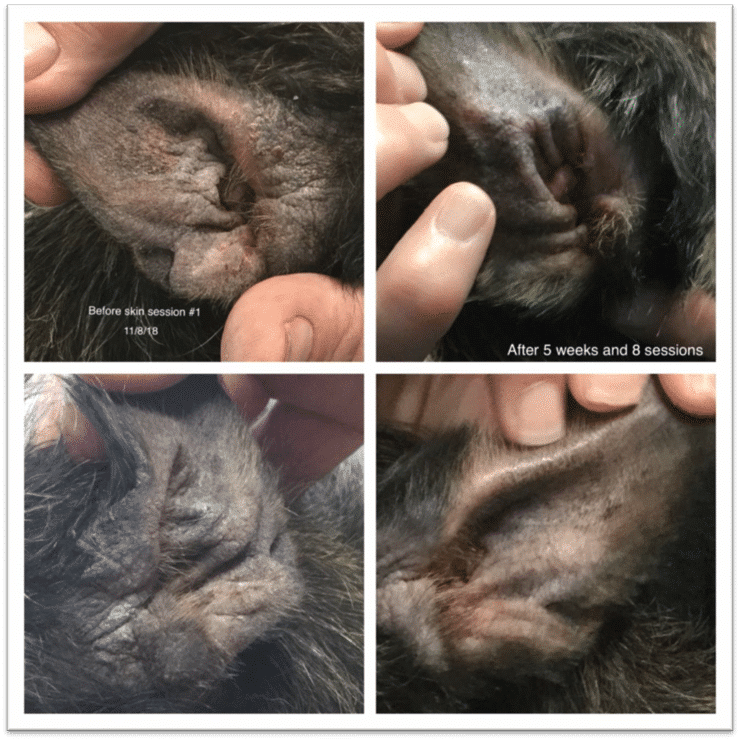 However even after posting Shug’s heart-tugging story on the SPCA website and Facebook page¸ Danielle was still waiting for interest in the cute little six year old. In the meantime¸ Cat remembered that her hairdresser Joann was looking for another dog. She texted Joann a photo of Shug after she was fully healed. Joann loved the idea but her husband Mark said skeptically “I don’t like her eyes.”

Back at King’s¸ Danielle decided to try posting new photos with Shug in some adorable hats and jackets. 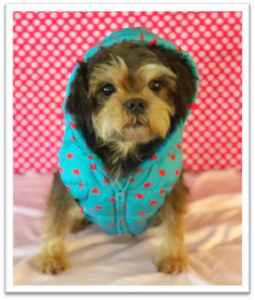 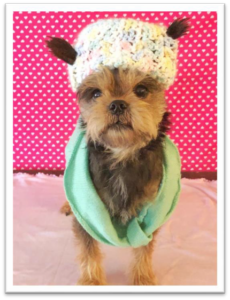 Cat forwarded the new photos to Joann. That sealed the deal–Joann and Mark said they would at least foster her for a while. Mark even went down to pick her up.

You can imagine what happened once she got to their home. Shug now lives happily and permanently with Joann¸ Mark (who loves her eyes)¸ and Shug’s two siblings—a Doxie named Trixie and a Maltipoo named Rosie. 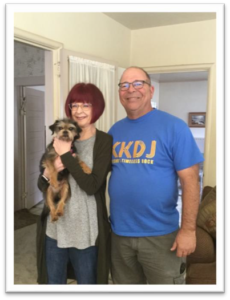 Remember¸ a veterinarian said that it could possibly take years for Shug to recover. But all were thrilled and amazed at what trained CPAe’s could do in just over ONE MONTH–with the right products at the right time. Shug’s chronic inflammation¸ itching and pain was completely eliminated and she now lives a happy and healthy life with a wonderful family.

Contact us for all your animal skin care related queries!

We only service the United States of America & U.S Territories Free Shipping on orders over $100 - excluding Alaska, Hawaii, and Puerto Rico.